Monthly Prakash Raj Movie Total (February, 2012): 5
Overall Prakash Raj Movie Total (as of February 29, 2019): 160
Chiru Navutho, Vanavil, Political Rowdy, Appu, Samudram
Another month of films with no subtitles. The high point was clearly Appu, in which Prakash Raj played a murderous eunuch brothel-runner. (If there's a specific word in Tamil, Hindi, Urdu, or something for this particular person/profession, I'd love to know it.) 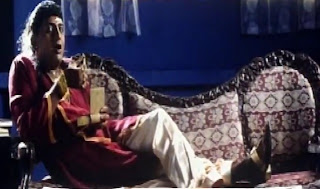 Role type: Prakash Jerk
The story: Venu (Venu) is left at the alter by Prema (Aruna). He saves Sandhya from danger, and falls in love with her, but she's engaged to Pratap (Prakash Raj.) Then Prema returns under difficult circumstances and reconnects with Venu. Who will end up together?
Thoughts on the film: (No subtitles.) It's been interesting to watch these early 2000's movies with heroes like Srikanth and Venu, who never became huge. They have some action, but not of the quality of the big star movies, but they also seem to have a better focus on the emotional tone of the story, whether it's a tear-jerker or a comedy.
Thoughts on Prakash Raj in the film: He worked well as the jerky fiance character, that you see in a lot of American rom-coms. Just.bad enough, but not totally evil.
Favorite Prakash Raj Scenes:


Vanavil (Tamil, 2000)
Date Watched: 2/3/2012
Role type: Prakash Bad
The story: Surya (Arjun), Prakashraj (Prakash), and Priya (Abhirami) are IAS trainees who become friends. When Surya and Priya become romantic, Prakashraj is jealous and sets up Surya so that he is sent to prison. Surya and Prakashraj Try to outwit and out play each other
Thoughts on the film: (No subtitles.) I enjoyed the early "IPS Academy" scenes, and that Abhirami and the other female characters had some agency in the movie.
Thoughts on Prakash Raj in the film: In the first half, he played a spoiled rich kid. This was a new "type" for me, so that was fun.
Favorite Prakash Raj Scenes: 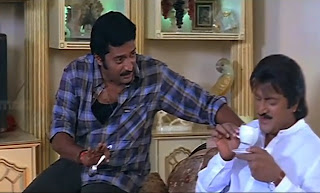 Role type: Prakash Pal
The story: Crime boss, Mohan Babu, falls in love with Charme. Along the way, he mixes it up with  a rival big man (Prakash Raj), who, it turns out,  is his brother-in -law. They become friends again, and Prakash and the gang of rowdies set out to help Mohan Babu win the love of Charme. The only problem is that she's already engaged to Abbas.
Thoughts on the film:  (No subtitles.) This was fun, full-on ridiculous masala. Mohan Babu had a certain gravitas that worked well. There were lots of fun songs, Charme was perfect as the spunky girl who is being pursued by an older gangster. There was a great scene when Mohan Babu took on a bunch of rowdies by using an upright fan as a weapon.
Thoughts on Prakash Raj in the film: Very fun! He was menacing in the first third, sentimental in the middle third, and hilarious in the final third as the gangsters tried to support the romance between Charme and Mohan Babu. This released the same year as Sivakasi, and I feel like the same bright, shiny shirts showed up in both films. I can just imagine PR walking to the other side of the set to shoot the two different films.
Favorite Prakash Raj Scenes: 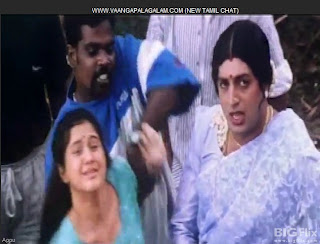 Role type: Prakash Bad
The story: Appu (Prashanth) is a taxi driver in Mumbai. He is still haunted by the suicide of his sister who was sold to a brothel. He is still trying to find out the culprit. Here he meets Geetha (Devayani) who is chased by a Eunuch Maharani (Prakash Raj) who is also responsible for the death of his sister. Maharani is the madame or kingpin of the flesh trade in Mumbai. Maharani wants the beautiful Geetha for the flesh trade. Appu fights and saves Geetha from Maharani. Here his friend Vignesh and his lover Kaveri die saving Appu and Geetha.
Thoughts on the film: (No subtitles.) I was only able to dig up one review from 2000, and it was mostly negative, but I really enjoyed the film. (According to the review, Appu is a remake of the 1991 Hindi film Sadak, directed by Mahess Bhatt and starring Sanjay Dutt and Pooja Bhatt.) There was a strong focus on the main storyline, and several key scenes that showed the relationship to growing between Appu and Geetha. I've watched a few recent Prashanth films as part of this project, and it was fun to see him as his younger, less bulked-up self.
Thoughts on Prakash Raj in the film: Wow! This is definitely on my list of top 10 favorite PR roles. He was fantastically menacing, whether he was was threatening rivals, putting on his make-up, or hunting for the fleeing lovers in a parking garage. I'm somewhat surprised that this role didn't seem to net him any awards that year, since this is the type of role that definitely gets Oscar buzz in Hollywood.
Favorite Prakash Raj Scenes:
The trailer has a few scenes of him in action: Trailer on Bollywood Hungama website. 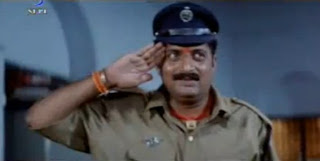 Role type: Prakash Cop
The story:  A.K. Sagar (Jagapati Babu) lives a middle-classed lifestyle near Versova, Mumbai, along with his widowed mother, and sister, Chandi. He gets in the bad books of Adi Koli (Ravi Teja), the brother of to-be M.L.A. Baba Koli (Tanikella Bharani). Then Sagar's life changes when he meets with a wealthy young woman, Rajya Laxmi! (Saakshi Sivanand ) and both fall in love with each other. He and his mother seek out a suitable bachelor for Chandi to get married to. Sagar and his girlfriend part ways temporarily as she has to go abroad. A few weeks when she returns - nothing is the same anymore. Chandi's wedding has been canceled, she has been molested and attacked by Adi, Sagar's mother, who tried to intervene is assaulted and is hospitalized, and Sagar has been arrested, tried in Court, found guilty, and is undergoing life in prison for killing Superintendent of Police Vijay Hari (Sri Hari).
Thoughts on the film: (No subtitles.) The comedy-romance kept the first half lively, and the second half was  pretty straight-forward revenge.
Thoughts on Prakash Raj in the film: Prakash Raj plays rural constable Nukaraju, who is an admirer of the late police superintendant, and ends up helping Sagar. The bumbling and over-the-top histrionics provided lots of scenery-chewing opportunities for Prakash Raj.
Favorite Prakash Raj Scenes:

Posted by dustdevil liz at 4:11 PM