I've been enjoying all of the "Kapoor Khazana" posts, co-ordinated by Katherine at Totally Filmi, 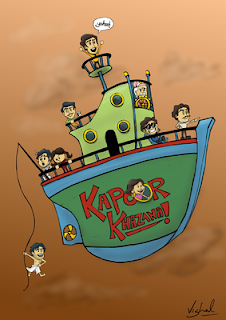 and I've been trying to decide what to contribute that would have a connection back to the theme of my blog. I did a bit of searching to see if any of the Kapoors had ever appeared in South Indian films, but hit a dead end. Then it occurred to me that Kareena and Karisma Kapoor have been in a few remakes of South Indian hits.

The Supporting Stars of Lagaan (One Degree of Prakash Raj)

I've been enjoying reading thebollywoodfan's tweets and blog posts for the annual celebration of "Lagaan week." It occurred to me that not only was Lagaan my first Bollywood film, and the film that started my interest in Indian film, but it also was the source of my fandom/obsession with filmi character actors. I watched Lagaan sometime in early 2002 (it was on two VHS tapes, from the local blockbuster.) The story, the visuals, and the music all sucked me in, but I was especially impressed by the actors playing the team members. I also had a "Hey! It's That Guy!" moment in Lagaan.

The (discontinued) pop-culture website Fametracker had an ongoing feature about the supporting players you'd see a lot in Hollywood films:


So how do you become a Hey! It's That Guy!? Well, it's pretty simple. Number one, you have to be in a lot of movies. Number two, it helps if you usually play exactly the same kind of role. Number three, you can't have a high name-recognition factor among the general public.

The "That Guy" of Lagaan was Kulbhushan Kharbanda, who played the local landlord, Raja Puran Singh: 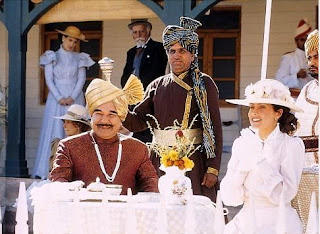 His was a familiar face, because earlier that winter I'd seen the not-quite-Bollywood Monsoon Wedding, in which he played one of the bride's uncles. 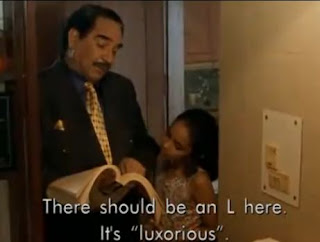 Many, many films later, I still have a little thrill of pleasure when Kharbanda shows up in a film.

Another character who made a strong impression in Lagaan, was Guran, played by Rajesh Vivek. 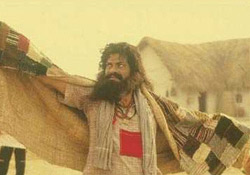 I watched a few Hindi films here and there in the years after I saw Lagaan, but about 2 years ago, I fell down the rabbit hole of watching several films a week (thanks to Netflix and my local library.) One of the first films I watched was Jodhaa Akbar, and I was happy to see two old friends:
A few months later, I was working my way through various Shahrukh Khan films, and there was Rajesh Vivek, playing the postmaster in Swades: 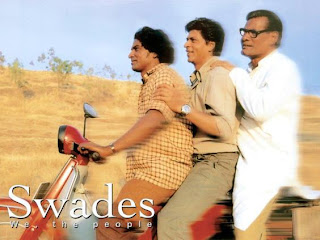 When I had the idea for this post, I was looking up the cast members, and to my delight discovered that Pradeep Rawat played Deva, the Sikh sepoy:
As I've watched more and more (and more) South Indian films, Pradeep Rawat has shown up quite a bit. Usually he plays a mustachioed villain (see the Tamil and Hindi versions of Ghajini), and most recently, I saw him going head to head with Prakash Raj in the Telugu film Bhadra: 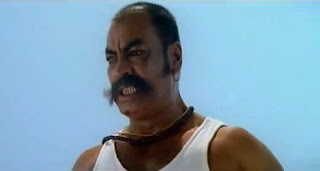 It's nice to know that the work of interesting supporting Indian film actors circles back from my current film fixation to the first Bollywood film I ever saw!

I'm approaching the "100 films watched mark" (6 more to go as of today!), which means I'm about 35-40% of the way through Prakash Raj's existing filmography. Late in April I was feeling so proud that I'd watched three Prakash Raj movies in a weekend, and then realized that Prakash Raj was in 3 movies that had released that weekend. Sigh.

So I've realized that this is going to be a long haul, and it's quite possible that Prakash Raj's rate of movie-making may outpace my rate of movie-watching. I need some strategies to start working through the next 100, and to give myself some goals. Here are some tactics I've considered:


What sounds interesting?  Any other suggestions?
Posted by dustdevil liz at 9:15 PM 4 comments: