The Heroine's Journey in Pournami

The Telugu film industry is the most hero-centric of all of the Indian filmdoms, with its larger than life fighters, acrobatic dancers, and hirsute comedy heroes.  Many of these films trace the journey of the hero, and closely align with Joseph Campbell's Monomyth/Hero's Journey/Hero With a Thousand Faces. The hero is called to adventure, and after first refusing the call, finds a mentor, faces a series of tests, leading an ultimate ordeal, reward, and return to normalcy.

The second or third Telugu film that I ever watched was Pournami (2006, Prabhu Deva, dir.), the intertwined stories of two dancer sisters and a young man caught up in a violent family feud. If Pournami followed the pattern of most Telugu films, the protagonist would be the tall, mustachioed dance instructor/tortured factionalist Shivakesava, played by Prabhas. It would also be logical, and an interesting twist, if the protagonist was the title character, dancer/circus performer Pournami, played by Trisha. (In fact, these two characters get center billing on the DVD cover.) 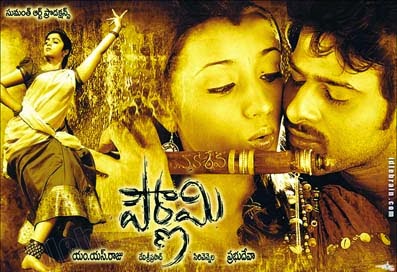 But I think that there's a compelling case that the true protagonist of the film is Pournami's younger sister, Chandrakala, played by Charme Kaur. This film--directed by Prabhu Deva, no less--is a rich story of a young women's heroic journey, and that's why it remains on my favorite and most rewatched films (even though Prakash Raj isn't even in it.)

Digging deep. One positive of taking a long break is that a whole lot of older movies that I couldn't find on dvd 3 years ago are now available online, so was able to cross off a lot of films from the 1990s.

Highlights of the month: Prakash Raj characters holding people at gunpoint in cars.

Read more »
Posted by dustdevil liz at 9:14 PM No comments: