So many Prakash Raj movies are coming out this fall and in the coming months. Here's a run-down of what's coming, and my level of excitement (in Prakash eyebrow raises) for each one.


Anwar (Malayalam, starring Prithviraj and Mamta!!!)
This looks like it actually has a suspenseful plot, so I'm trying not to read too much about it. It looks like a "Prakash Cop" role, with a focus on terrorist interrogations. I'm loving the clunky glasses, I love Mamta, and I've loved the Prithvi-Prakash pairing in other films.


Level of excitement for seeing Prakash Raj in this movie: 5 eyebrow raises.

Brindavaanam (Telugu, starring Jr. NTR and Kajal)
I saw a short summary online that Prakash Dad and Srihari Dad play feuding factionalists with daughters. Jr. NTR's character tries to bring the feuding Dads together.  I've liked the way Prakash plays off of Tarak and Srihari in other films, plus he will be wearing lots of white and, fingers crossed, lungis!

Level of excitement for seeing Prakash Raj in this movie: 4 eyebrow raises.
Khaleja (Telugu, starring Mahesh and Anushka)
I'm really excited to see Mahesh, I'm loving the soundtrack and the northern India location, but it sounds like a pretty standard Prakash Bad role.
﻿

Prakash Raj makes a short appearance a few minutes into this "making of" video:
Level of excitement for seeing Prakash Raj in this movie: 3 eyebrow raises.
Badrinath (Telugu, starring Allu Arjun and Tammanah)
There hasn't been a lot of official info on this one, but what has been confirmed:  scenes were shot in Manali (and Prakash Raj and Pony Verma honeymooned there while he was shooting), Imran Khan is NOT in it, andV.V.Vinayak is directing. I think I read that it's a negative role, but who knows.

Prakash Raj wasn't at the muhurat, but it's still fun to watch Bunny, Chiru and the gang.
Level of excitement for seeing Prakash Raj in this movie: 2 eyebrow raises (but that could change with more info).


Electra (Malayalam, starring Nayantara and Manisha Koirola)
This is a modern-day adaptation of the classic Greek story/play. I'm psyched that this has some strong, interesting female roles for Nayantara and Manisha to tackle. Prakash plays the Agamemnon role and he may not have a lot of screen time, but it's "Classical Prakash Dad"! It sounds like the release is tied up in some legal brouhaha, but hopefully it will make it's way to subtitled DVD in the next few months. 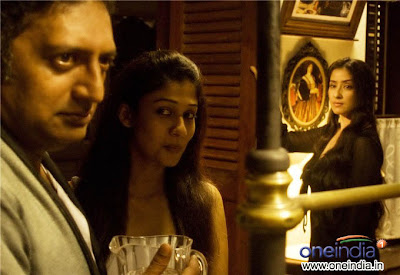 Level of excitement for seeing Prakash Raj in this movie: 4 eyebrow raises

Vaanam (Tamil, starring Simbu, Bharath, Anushka)
This is the Tamil remake of the Telugu Vedam, which I am looking forward to seeing. (I still want to see Bunny in it before seeing the Simbu version, but I'm always excited to see Bharath.) Prakash is slated to play the Manoj Bajpai role. I've really liked Prakash Raj in some of these more nuanced roles (like the Kannada Atithi.)  Scoop on the South just posted some photos: 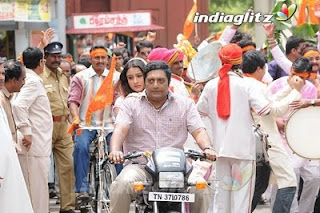 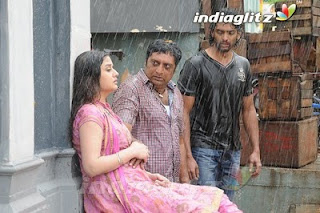 Level of excitement for seeing Prakash Raj in this movie: 3.5 eyebrow raises ﻿
Posted by dustdevil liz at 11:41 AM 2 comments:

Google is now alerting me to all kinds of Prakash Raj news, for instance:

Prakash Raj’s brother, Prasad Raj is debuting in Kollywood as a villain with 'Padai Soozha'. Debutant director AS Prabhu is introducing the heir of Prakash Raj in the film produced by Royal Moon Pictures. 'Padai Soozha' is about the rivalry between a gangster and some college students. Prasad Raj is the gangster.

As Prakash Raj made his first entry as a villain with K. Balachandar’s film, his brother is also playing a baddie in his first film being directed by A.S. Prabhu. "Though he resembles his brother Prakash Raj, Prasad is totally different from him in his style of acting. He has a natural flair and is impressive in stunt sequences,” claims the director. Maybe that’s why he has reserved a special, introductory fight sequence for Prasad — a rare privilege for an actor making his debut.

If Prasad Raj's career takes off, I'd love to see a Kannada-language version of the Fabulous Baker Boys, with Prakash as Jeff Bridges, Prasad as Beau Bridges, and  Mamta Mohandas in the Michelle Pfeiffer role.

A Guide to the Roles of Prakash Raj

I'm going to start doing some blog posts for specific movies, but I thought I'd play catch-up on the 46 films I've seen so far by cataloging them by the "types" of roles that Prakash Raj plays in each one. Credit goes to the folks at BollyWHAT/Beyond Bollywood forum for the initial identification of these types, which I've fleshed out a bit and will elucidate in further posts.

"Prakash Cop"
Definition:  police officer (noun), a member of the civil force of a national or local government, responsible for the prevention and detection of crime and the maintenance of public order. Generally a morally upright supporter of the law, or an inept-appearing-yet-savvy investigator on the trail of the hero.
Citations to date:  7, see Athadu, Bombay, Tagore.
Note 1:  occasionally inlcudes "Pal" elements, though a true "hybrid" is not yet part of the database.
Note 2:  it is believed that "Prakash Bad Cop" hybrids also exist, and merit further research.
Posted by dustdevil liz at 11:27 PM 6 comments:

Ram Gopal Varma and I agree...

Posted by dustdevil liz at 10:12 PM No comments:

Look what popped up in my google alerts this morning!

Acting power house Prakash Raj has announced a plan to set up an acting school in south India to train actors. Prakash Raj revealed this plan while speaking at the 125 days celebration event of his first directorial venture ‘Naanu Nanna Kanasu’ on Sunday.

‘Prakash Raj Academy of Acting’ will most probably set up in either Hyderabad or Bangalore on 20 acres of land. An American Indian Mr Prasad has come forward to invest Rs.300 crores in Indian film industry and Prakash Raj is the prize catch for him.

With the American NRI the meeting with Karan Johar, Aamir Khan, Prakash Raj the first meeting was held recently and the outcome of it is ‘Prakash Raj Academy of Acting’. The NRI investor is keen on funding Rs.20 crores on this acting Academy says Prakash Raj.

(Rrreyyy! Why didn't I wait a week to start this blog? The title of this post could have been the blog title. Think of the page hits...)

I guess I'll have to wait to sign up for actual classes in Hyderabad or Bangalore (at least until that NRI investor writes the check) but in the meantime, I've already designed my own, independent-study, online coursework:

After I'd seen 10-plus films with Prakash Raj, it became clear that his presence always seemed to improve the experience of watching the film.  He always added a little something extra--he spiced things up--and it occurred to me: 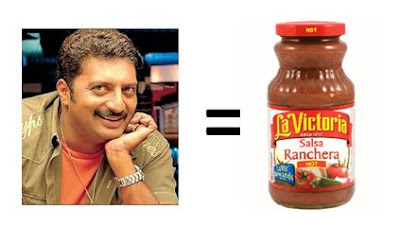 (Note: I imagine that a more culturally appropriate analogy is probably Prakash Raj = Indian Pickle/uppinakaayi/pachchadi/oorugai/achar, but I've mostly lived in the salsa-eating regions, so salsa it is!) 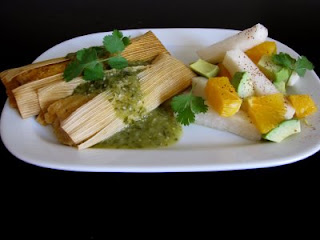 Prakash Raj makes a good or great movie even better.  Pokiri is, in my opinion, a nearly perfect film. It's got a great hero entrance, fantastic fights, and one creepy, corrupt cop (played by Ashish Vidyarthi)--but in the second half, things really get rolling with the arrival of the true force of evil, Ali Bhai. 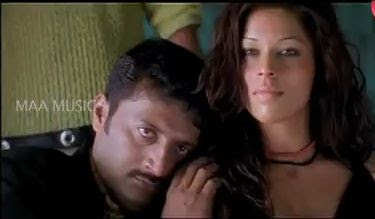 Salsa makes so-so food taste better. Back in college, a favorite late-night snack was the always reliable cheese quesadilla. Slightly stale tortillas and industrial cheese were made palatable with the addition of good old Pace Picante. Did you overcook the eggs? Salsa can help with that. 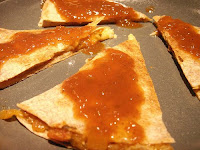 Prakash Raj makes a so-so movie better.  Wanted (the Hindi remake of Pokiri) is a polarizing film. But I think that even the non-fans who make it past the interval would agree that Ali Bhai's theatrics (especially his scenes when he's in custody) are pretty entertaining. 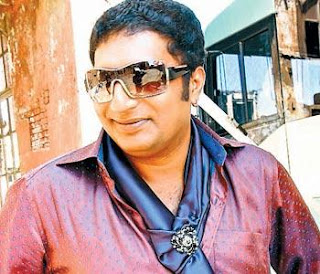 Salsa is great on its own.  Chips are delicious, but mostly as a delivery mechanism for fresh salsa. 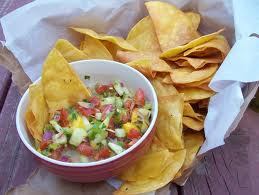 Prakash Raj is great on his own. Kanchivaram is the rare Indian film that really shows the arc of a character across time, and Prakash Raj does an amazing job of realizing Vengadam's humor, pride, and tragedy. 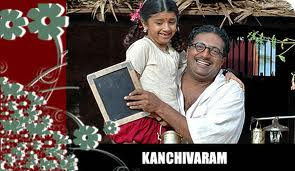 A little salsa can go a long way. It just takes a few drops of Cholula salsa to make eggs (or Bloody Marys) perfect. 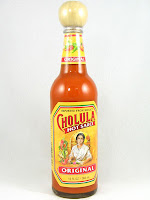 A little Prakash Raj can go a long way. In Mass he's the sleezy lawyer to Rahul Dev's baddie.  He's only onscreen for three minutes, but in that scene he hatches the plan that nearly destroys the hero (spoiler alert: Nagarjuna wins in the end!)

Salsa is great is unexpected ways.  I give you the paleta de pico de gallo, a Mexican popsicle made of chopped mangoes, cucumbers, and chiles. Sweet, spicy, frozen salsa on stick.

With Prithviraj! On the beach! In the sugarcane!

My Year of Prakash Raj: Day One!

Welcome to "My Year of Prakash Raj," an ongoing project to watch all of the films of my favorite actor working in Indian film.

About me: I'm a Colorado native and a pop-culture junkie. I've been watching Hindi films on and off since 2001, and in 2009 it became a serious obsession. I watched a LOT of Hindi films, started reading and posting on BollyWHAT, and a year ago I saw my first Telugu film. Since then, I've become a die-hard fan of South Indian films.

About Prakash Raj: The wikepedia entry has all of the basic biographical facts, but what you really need to know is that Prakash Raj is:

a) in about every third South Indian (Tamil, Telugu, Kannada, Malayalam) film you will ever watch. Check out his filmography. Yup, that's a lot of films.

b) AWESOME!!!!!! He's a great dramatic actor (with two National Awards) AND the all-around utility player. He can be a loving or stern father, a righteous or comical police officer, and a whole range of psychotic, maniacally laughing villains. 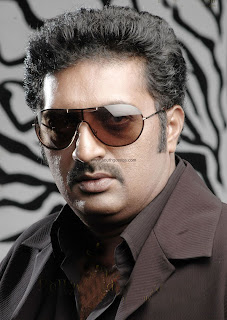 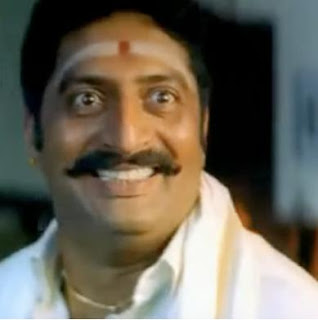 About the project: I've automatically been adding movies to my "to watch" list when I see Prakash Raj's name in the credits. I kept looking at that filmography on wikipedia, and began to wonder what all of those movies were about, and what would it be like to see them all. I was also reading some random blog about doing something every day for a year, and thus was born "My Year of Prakash Raj", and my goal to see all of Prakash Raj's movies (in a year, give or take.)

Now, to be honest, this isn't really Day One. That was apparently back in 2003, when I first saw Mani Ratnam's Bombay, and it was almost a year ago when I truly fell for the acting chops of P.R., as the bewildered, jet-setting father in Nuvvostanante Nenoddantana. At this point I'm anywhere between 15%-25% on the way to my goal, but it feels like Prakash Raj is making films faster than I can watch them, so this may be a (pleasantly) Sisyphean enterprise.

My hope is that in the coming days, weeks, months, etc. that this blog will be a place to record some purposeful and random thoughts about South Indian cinema in general, and the work of Prakash Raj in particular.

Inspired by Tollywood is My Bollywood's inaugural post about filmi muhurats, I'll kick things off with this image from the Tamil film, Giri: