Overall Prakash Raj Movie Total (as of 5/31/11): 93
Ekangi, Athonakadde, Dil, Andarivaadu, Bobby, Seenu, Azad, Azhagiya Theeye, Hitler, Athade Oka Sainyam
Whew! 10 films this month and inching my way towards 100.  These are mostly older films (2005 or earlier), including a Kannada "art film" (?), two Chiranjeevi films, a home production, and several WTF moments. It's a lot to read, and something went wonky when I was formatting pictures, so feel free to just enjoy this screencap of a youngish, clean-shaven Prakash Cop: 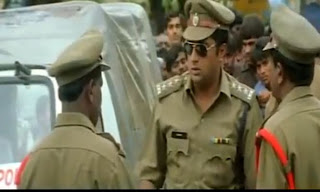 Read more »
Posted by dustdevil liz at 11:50 PM No comments:

I have to admit that my tastes in film writing and journalism tend more to the "glossy pictures and witty captions" style of Entertainment Weekly, than the serious film criticism of your Cahiers du Cinema. I did occasionally read a review at the Passion for Cinema website, when I read that they were shutting the site down, I took a few minutes to search for some articles and reviews to save to my hard drive. Among my finds was this 2007 post about Prakash Raj, and some related comments, which I'm reposting for posterity and so I can reference some of these comments.
I  have Dhaya and Nagamandala in my "to watch" stack of dvds, so I'll definitely be watching them in June.

Read more »
Posted by dustdevil liz at 9:47 PM No comments:

May 15 is Madhuri Dixit's birthday, and Gaja Gamini at the "Bollywood-ish Blog" has organized a week of "Madhuri Magic"in blog land. Others have written detailed posts about Madhuri's best dances and most impressive roles, and as I was pondering what I might add to the mix, and I kept coming back to my favorite Madhuri role: Saraswati in Beta (1992). 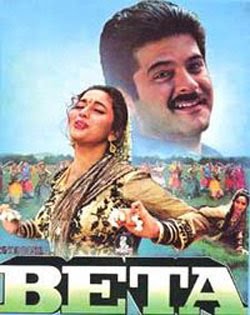 The first half of the movie focuses on the "I hate you-I love you" romance between fiesty Saraswati and Raju (Anil Kapoor), who is good-hearted, not especially sharp, and devoted to his scheming step mother (Aruna Irani.) The second half of the film focuses on the home front battle between Saraswati and her new mother-in-law.
Sandwiched in between these halves is the pivotal moment when Saraswati and Raju are trapped in a barn during an overnight rainstorm, and she realizes that she loves him (why she would fall for such a sappy character, who knows. Maybe she figures she can boss him around.) As they return to the village they are confronted by the village thug, Saraswati's father, and her fiance, and the bad guys start beating up Raju. At this point Saraswati springs into action in my favorite scene:


I saw Beta after I was already deeply entrenched in watching South Indian films, and Saraswati seemed to behave in this scene very much like a South Indian film hero:
-she brandishes a big knife at the bad guys.
-she then delivers some choice insults to them.
-that look on her face says "you do not want to mess with me."
-there are close-ups of her striding past the bad guys, set to pounding music.
-she resolves the situation by demanding that her romantic interest marry her.


It makes me so happy to see a scene where the heroine saves the hero, and Madhuri really conveys the intelligence, determination, and righteous anger of the character. She seems to excel at playing strong, independent female protagonists (Khalnayak and Aaja Nachle are my other favorites), and even in the midst of the cheesy Rajkumar, her character gets to save the prince at least once. It's a shame that these types of roles (and/or the actresses who can play them) don't seem very prevalent in Bollywood anymore.

The South Indian connection:
When I was looking up information on Beta for this post, it came as no surprise that the film is in fact a remake of Mallamana Pavaada, a 1969 Kannada film starring SarojaDevi and Rajkumar. (The fact that Anil Kapoor spends most of the film wearing a lungi should have been a dead giveaway that it was a remake of a South Indian film.)
In 1987, there was a Tamil remake called Enga Chinna Rasa, which must have been spark for the Hindi version. It's posted on youtube, but as far as I can tell it does not have the scene that struck me as so quintessentially South Indian filmi, and there doesn't seem to be a lot of scythe brandishing at all in the film.  The Telugu remake Abbaigaru was released in 1993. Meena proposes to Venkatesh with a Telugu-style mangalsutra/thaali, instead of sindor, 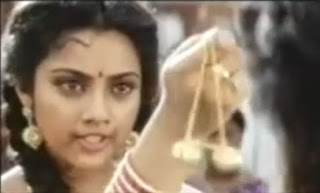 but oddly, it doesn't have the scythe scene either. In order to have that scene work, it has to be clear that the hero is getting beaten up by a bunch of guys, and my theory is that early '90s Telugu film heroes would have had it in their contract that they couldn't be defeated by less than 100 guys.
To wrap it all up: Madhuri was in Beta, Venkatesh was in the Telugu remake of Beta, and Venky was in Nuvvu Naaku Nachav and Subhash Chandra Bose with Prakash Raj.