Monthly Prakash Raj Movie Total (January, 2012): 10
Overall Prakash Raj Movie Total (as of January 31, 2012): 155
Villu, Yaare Neenu Cheluve, Business Man, Magizchi, Engeyum Kadhal, Solla Solla Innikum, Sollamale, Senthooram, Mambattiyan, Guruparvai
I made it through a few more of the older Tamil and Telugu films that were up on the streaming sites before they were shut down in late January. I'm bummed out by this development, since there are a lot of movies that were posted to Megavideo and Videobb that I really can't find for sale in the US. On the other hand, I do get that those sites made most of their money from people uploading films and music that are widely available for sale. Ah well, it was good while it lasted, and perhaps at some point I'll have access to a legal copy of the 1995 Telugu movie Gunshot, starring Ali. (I really, really hope so!) 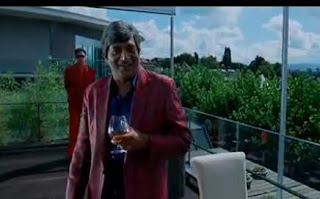 Role type: Prakash Dad/Bad
The story: Pugazh (Vijay) seeks revenge on crimelord JD (Prakash Raj). Pugazh romances JD's daughter Janavi (Nayantara), in order to get close to JD, and begins to eliminate JD's henchmen. The story progresse through a bunch of twists and turns, flashbacks, and crazy fight scenes.
Thoughts on the film: According to internet sources, this is a remake of the Hindi film Soldier, starring Bobby Deol. I have to admit that I was only half watching it, but I did enjoy the over-the-top action scenes, and the Prabhu Deva-Vijay combo made for some fun songs.
Thoughts on Prakash Raj in the film: He was fun, crazy villain, both in the present and in the flashbacks. And helmet hair was quite impressive, and he had a helicopter!
Favorite Prakash Raj Scenes: 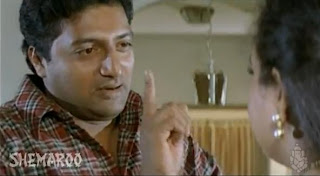 Role type: Prakash Dad(ish)
The story: From the youtube description:
"Here the main hero Surya (Ravichandran) and Kamli (Sangeeta) fall in love and romance each other through letters without having seen or met each other even once."
Thoughts on the film: (Watched without subtitles.) It seemed like kind of a sweet movie in the vein of Sleepless in Seattle, where the lovers keep crossing paths. Ravichandran and Sangeetha were both very likable.
Thoughts on Prakash Raj in the film: He plays the nice brother-in-law of the heroine, who just wants the best for her. There were lots of cute scenes of him hanging out with his wife. 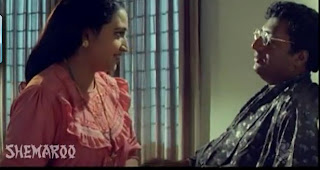 Role type: Prakash Bad
The story: Surya (Mahesh Babu) comes to Mumbai, and gradually gains power as the leading crime lord in the city. He starts a romance with Chitra (Kajal), the daughter of the police commissioner (Nasser), and challenges rival criminal Jai Dev (Prakash Raj.)
Thoughts on the film: (watched without subtitles) It was fun, and I'm sure I'll enjoy it more whenever I see it with subtitles. They were goofy, but I did like the scenes with Surya, Chitra, and her flaky NRI friend.
Thoughts on Prakash Raj in the film: A pretty standard bad guy. I appreciate that Puri Jagganadh does a lot of super-close ups of Prakash Raj's face, especially when he's talking on the phone. (There were lots of similar shots in  BHTB.)
Favorite Prakash Raj Scenes: The big flashback when his evilness is revealed. 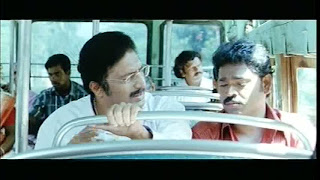 Role type: Prakash Pal
The story: From IndiaGlitz review: The movie revolves around Thiravi (Gowthaman) for whom his sister (Karthika) is everything. He lives a contended life with his parents, grand mother and sister. He also gets the job of government teacher in his village. And Thiravi has a love affair too, with Kuzhali (Anjali). When everything goes well, trouble breaks out in the form of Sevatha Perumal (Sampath Raj). Belonging to the same caste, he marries Thiravi's sister. But within few months of his wedding, he sends her back to Thiravi's house alleging that she cannot mother a child. The incident results in major repercussions in Thiravi's house and the impact is so much that Kuzhali is forced to marry an outsider by her parents. Thiravi's efforts to strike peace in his sister's family end in vain. When he feels everything has slipped from his hands, his friend (Seeman) comes to his rescue.
Thoughts on the film: (No subtitles.) Now that I've seen a few of these films, I'm beginning to understand the scene in Tamizh Padam where they satirize the whole brother-sister film genre. I thought it was interesting that it was adapted from a book, and was happy that the sister got a happy ending. Sampath Raj was good as the conniving, rich brother-in-law.
Thoughts on Prakash Raj in the film: He's a friend/teacher/local official who helps out the hero. All in all, a nice guy, with a few scenes sitting behind a desk.
Favorite Prakash Raj Scenes: A scene in front of a church--I really liked the composition. 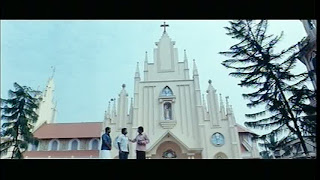 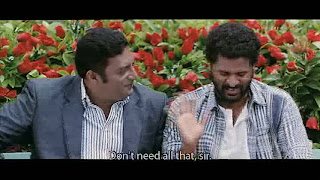 Role type: Prakash Pal
The story: Kayal (Hansika Motwani) lives in Paris, where she spots visiting millionaire businessman Kamal (Jayam Ravi.) She tracks him down by digging through her father's Private Investigation files, and they spend the day together. Kayal falls in love with Kamal, but goes away on business. When he returns, she pretends to have other boyfriends in order to make him jealous. Kamal hires a P.I. to investigate the boyfriends, there are few more twists, but love triumphs.
Thoughts on the film: I liked it much more than I expected, even though the story wasn't anything earth-shattering, and Hansika's character was slightly crazy. The visuals were fantastic and imaginative, which I expected from Prabhu Deva. My favorites were a scene where Kayal daydreams about Kamal, and visuals a shadow animation of him on her wall, and the song "Nangai," where Parisian "businessmen" dance and sing in Tamil to impress Kayal.
Thoughts on Prakash Raj in the film: He has a very small cameo in the film. He plays himself, angling for a role in the film.
Favorite Prakash Raj Scenes: The only two scenes he's in.
-Prabhu Deva sings the title song, then introduces the hero:
-A "street tough" steals Kayal's money, and Kamal goes after him in a very creative chase scene, that includes another appearance by Prakash-garu. 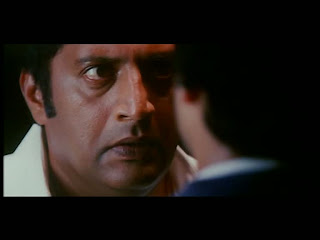 Role type: Prakash Bad-ish
The story: Sathya (Navdeep) is a carefree young guy, who has unsuccessful romances with Saara (Anjali), Meghna (Suja), and Radhika (Madhumitha), who dumps him for his good friend Guru (Abhinay.) When Guru abandons Radhika, Sathay makes sure that they are married, which brings him into conflict with Guru's friend (? mentor?) Badrinath (Prakash Raj.) Along the way, Sathya mets his true love, Anu (Mallika Kapoor.)
Thoughts on the film: (No subtitles) It was a little hard to follow, and I couldn't keep track of which girl was which. The soundtrack wasn't great, either.
Thoughts on Prakash Raj in the film: The character did a lot of listening to other people talk, which meant lots of reacting, facial expressions.
Favorite Prakash Raj Scenes: There was recurring comedy bit where people are constantly garlanding the character. 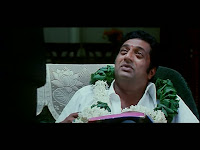 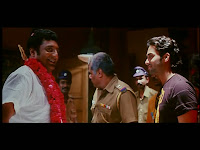 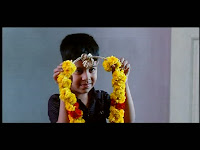 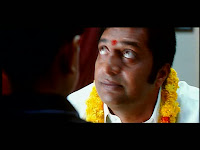 Role type: Prakash Doc
The story: A shy man pretends to be deaf-mute to spend time with the woman he loves. This film was remade in Telugu as Seenu.
Thoughts on the film: (not subtitles) I was mostly impressed with Livingston, who did a great job of portraying the pathos of the main lead. He was more believable to me as the ugly duckling loser than Venkatesh in the Telugu film.
Thoughts on Prakash Raj in the film: Pretty much the same doctor character who provides advice to the lead.
Favorite Prakash Raj Scenes: Again, the big finale where the lead cuts his own tongue out, and blood sprays in the doctor's face. In my review of Seenu, I joked that I liked to imagine Prakash Raj doing take after take with the fake blood, and didn't realize that it was at least the second time that he'd done that shot!

Senthooram (Tamil, 1998)
Date Watched: 1/26/2012
Role type: Prakash Bad
The story: Devayani plays an orphan, who ends up living with Prakash Raj's village leader character and his wife. The Prakash Raj character seems like decent character, who loves his wife, but then he starts to lust after Devayani's character. She has started up a sweet romance with some other guy. It all ends with a big showdown in at the temple.
Thoughts on the film: (Watched without subtitles). I liked Devayani and the actress who played the leader's wife. It was a bit hard to follow, and for awhile I wasn't sure if whether things were happening in the present or in flashbacks.
Thoughts on Prakash Raj in the film: He had an impressively bad mustache, and spent a lot of time hanging out on a swing. This was another role where he did the transition from seemingly decent husband to creepy villain with conviction! 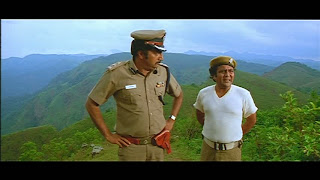 Role type: Prakash Cop
The story: After a village landlord kills his father, Mambattiyan (Prasanth) becomes an outlaw hero, robbing from the corrupt and helping the poor villagers. Mambattiyan is aided by village belle Sornam (Mumaith Khan), and wins the love of one of the women he robs, Kannathal (Meera Jasmine.) He is ultimately tracked down by Police officer Ranjith (Prakash Raj), with tragic results for everyone. 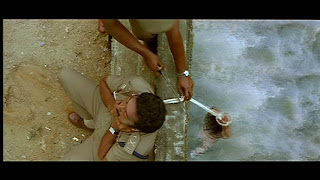 Thoughts on the film: (no subs) I really enjoyed that Mumaith had an actual role that worked for her, and TWO dances (although one of the dances wasn't edited well.) The Robin Hood story was interesting, and Prasanth did a good job being stoic. I enjoyed the bridge escape scene that I'd seen before in Rob Roy.
Thoughts on Prakash Raj in the film: He's the dogged, upright cop who tries to fulfill his duties, but over the course of the film, comes to realize the just cause of the man he's pursuing.
Favorite Prakash Raj Scenes:
---------- 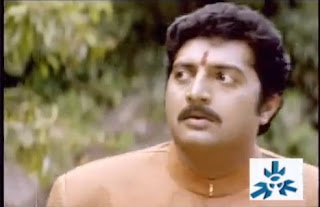 Role type: Prakash Lead
The story: Gurumurthy (Prakash Raj) seems to be a simple garage owner, who has a nice friendship with his mechanic Mani (Manivannan.) But in quick succession he romances and then humiliates two women--Pooja (Eswari Rao) and Sonali (Madhu Sharma). As Gurumurthy begins to target a third woman, a flashback reveals his happier days as a student and his friendship with Priya (Anju Aravind.) Thoughtless actions by three young girls leads to tragedy for Guru and Priya, and the story returns to the present as Guru seeks revenge on the final girl.
Thoughts on the film: (no subs) The film was dubbed in Hindi as Naya Natwarlal, so I may have to see if that's available anywhere with subs. The revenge plot was fine until the end, because his revenge on the last girl seemed a little bit extreme in relationship to the other acts (and to her original crime.) The comedy-side love story with Manivannan and Khushboo was a cute distraction. 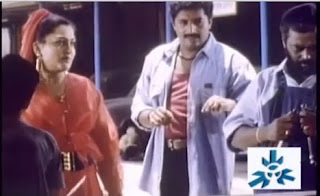 Thoughts on Prakash Raj in the film: It was fun to see him playing a range of "characters" in the film--the eager young student, the serious older man, and the various types who appeal to the different women.
Favorite Prakash Raj Scenes: The many hats of his "characters."