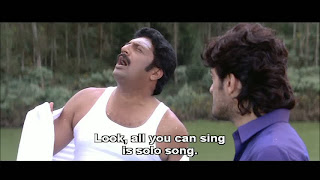 Role Type: Prakash Cop
The Story: Subramania Siva (Ajith) has killed the corrupt police officers who killed his father and sister, and is in jail awaiting his death sentence. SP 'Nethiadi' Nandakumar (Prakash Raj) is an upright police officer on the case of terrorist blasts in Coimbatore. He recruits Siva to help him track down the terrorists, with a carte blanche to use unconventional methods, free of police oversight.
Thoughts on the film: This was pretty straightforward story of corruption and revenge. I'm so used to flashbacks happening after the interval, that it threw me off when Siva's flashback story happened so early in the story. It seemed like some of Ajith's long-haired, crazy guy scenes were cribbing from Anniyan just a bit, but when he finally got into action as Paramasivan, things picked up. 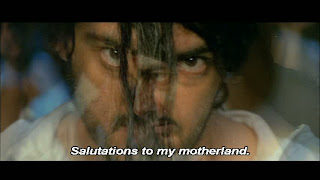 Thoughts on Prakash Raj in the film: The best part of the film were the succession of polo shirts that SP Nandakumar wore: 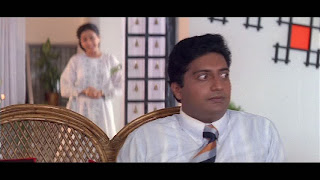 Role Type: Prakash Hero (!)
The Story: Swarnamukhi (Devayani) is the illegitimate daughter of the local MLA. She and her mother move to Chennai, where she finds success as a classical dancer. Prakash Raj's character (can't remember his name) is an aspiring engineer, working as a shoe salesman. He falls in love with Swarna, and slowly a friendship and romance blossoms. She reveals that in her home village she was in love with a local rowdy, Parthiban's character (also forget his name.)who disappeared.  Parthiban's character reappears, and reveals that he was unjustly imprisoned to keep him away from Swarna.  He tries to win her back, using more and more stalker-ish tactics, until a final showdown between Parthiban and Prakash Raj.
Thoughts on the film: The first part of the movie focused nicely on Swarnamukhi and the troubles she and her mother faced. The romance with Prakash Raj was really sweet, and had a nice, normal build-up. 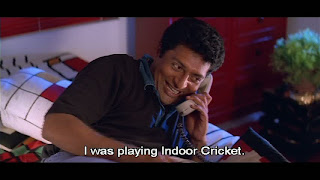 The second half with Parthiban's crazed lover wasn't as strong. It seemed like Prakash Raj's character was thinking "how did I end up in this crazy situation", which resonated with me.
Thoughts on Prakash Raj in the film: This is possibly the sweetest, most decent character I've seen him play (Mozhi is a close second).
Favorite Prakash Raj scenes:
Prakash Raj goes to Swarnamukhi's house for tea, and makes some clumsy small talk: 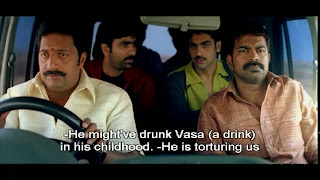 Role Type: Prakash Dad
The Story: Bhadra (Ravi Teja) shows up late at his sister's wedding, bringing with him Anu (Meera Jasmine). Anu is insulted by one of Bhadra's uncles, and later kidnapped by mysterious goondas. Bhadra reveals to his family that Anu is the sister of his college friend Raja. Bhadra goes home with Raja, falls in love with Anu, and then helps her to escape when Raja and their elder brother, Surendra (Prakash Raj) are killed in a factionalist fight. Back in the city, Bhadra must rescue Anu from the evil Veeraya (Pradeep Rawat.)
Thoughts on the film: It was a little hard to buy Ravi Teja as a college student, but he does well in goofy, slacker roles. I liked the flashback scenes with Anu and Bhadra, when she is dubious about him, and he's trying so hard to impress her. Brahmaji was really great as the henchman, and got a lot do.
Thoughts on Prakash Raj in the film: This was a fun cross of the hardcore factionalist and the sort of urbane businessman types that he plays. 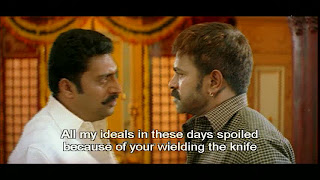 Favorite Prakash Raj Scenes: When Bhadra basically says, what's up with you crazy country people and your feuds, and Surendra goes to town on him, and says "Hey, I went to BITS Piilani, my wife has an M.S. We're educated people who thought we'd  break the cycle, but it sucks you back in!" 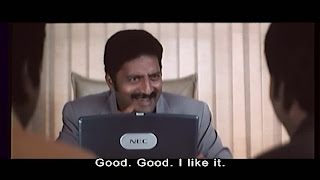 Role Type: Prakash Boss
The Story: Seenu (Ravi Teja) is on a trip to deliver his wedding invitations, and reminisces about his past loves. First is Veenu (Mallika), Seenu's childhood classmate, whose family ubruptly moves after graduation. Next, Seenu remembers his college love, a Malayalee girl named Latika (Gopika). Her family objects to the match, and drives Seenu and his family from town. Later, working at an ad agency in the city, Seenu meets Divya (Bhumika Chawla) who is struggling to care for her ailing mother.

Thoughts on the film: Really a sweet film, I'm curious to see the Tamil original. Impressed with Ravi TejaSeenu, his friend Satyam (Sunil) and the Malayalee locals. It also had some nice scenes with the female characters interacting, and that it showed the happy and bittersweet endings to each of their stories.
Thoughts on Prakash Raj in the film: He plays Divya and Seenu's boss at the ad agency, and is only in 2-3 short scenes so it's very much a "special appearance."
Favorite Prakash Raj Scenes: A scene with some"Sorkinesque" walking and talking in the halls:

Role Type: Prakash Bad
The Story: I watched this without subtitles, and I cannot seem to find a review or synopsis anywhere, here's what I think happened:  Venkatesh and Soundarya meet working in the office of a factory (he might be the son of the factory owner.) She doesn't really like him, but somehow they end up married. Then they separate. Meanwhile Prakash Raj, who works at the factory, is conspiring with a rowdy (Srihari) to kills Venkatesh and/or Soundarya. In the end, a pregnant Soundarya comes to the rescue of Venkatesh and the bad guys are defeated.
Thoughts on the film: By far, one of the best things about watching these earlier films is getting to see Soundarya. I love watching her, even without subtitles, and she's especially good in these haughty, dismissive roles.
Thoughts on Prakash Raj in the film: He's not in in much, BUT most of his scenes are with a mullet-headed Srihari, so that made them especially fun.

Favorite Prakash Raj Scenes: when Venky does a double beat down on Srihari and Prakash: 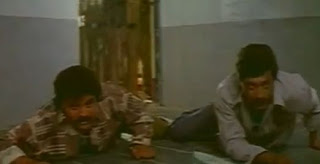 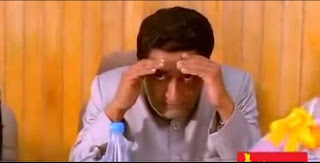 Role Type: Prakash Bad(ish)
The Story: Wikipedia can explain it in fewer words than I can:

Chellammaa (Geetha), a singer, is wedded to a chauvinistic, sadistic industrialist named Prakash (Prakashraj). She is unable to beget a child and hence is the target of hurting words from Prakash and his mother. When he prohibits her from singing, it is the last straw for her and they divorce. He marries Karpagam (Renuka), a doormat wife, while Chellammaa stays single, with a cook Kokila (ex-newsreader Fathima Babu in her first movie appearance) around to help her. Kalki (Shruti) works in an ad agency and is relentlessly pursued by co-worker and model Paranjothi (Rahman) but she not only rejects him but debunks love and sentiments. Chellammaa becomes friends with Kalki after a few encounters and Kalki moves in as a paying guest. But she strikes up a friendship with Prakash and as the result of an affair with him, she ends up bearing his child. What happens of this leads up to the climax.

Thoughts on the film: This is the first K. Balachander film I've seen, and I understand that this sort of unusual plot in an everyday setting is one of his trademarks (I have a few more to see in the course of this project, so I'm looking forward to it.) I watched it without subtitles, so had to figure things out from context and a few English sentences tossed around. I particularly liked all of the scenes with the women talking together.
Thoughts on Prakash Raj in the film: It was to see Prakash in a slightly different "bad" role. Over the course of the film, he ended up yelling at the three different women in his life. Also, this may take the prize for the most photographs/portraits of a Prakash Raj character used in a film: